Recent statistics show that the crime rate in Pennsylvania is 25% lower than the national rate, which is good news. But any criminal lawyer will tell you that there are still thousands of people who need a strong defense after being arrested for violent crimes, no matter where you live.

The Law Office of Steven F. O’Meara has extensive experience as a criminal defense lawyer helping clients accused of violent crimes. It’s become clear that knowing the five most common types of violent offenses in Pennsylvania will help people understand the risks of committing these crimes.

A violent criminal conviction can result in a long prison sentence and term of probation. When you complete your sentence, your options for housing, education and employment may be limited due to these convictions.

The five most common types of violent crimes in Pennsylvania include: 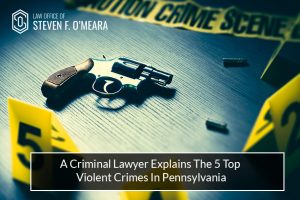 Although these are serious violent crimes, a Pennsylvania criminal defense lawyer can offer you the kind of vigorous defense that can win an acquittal or convince a prosecutor to reduce the charges and agree to a reasonable plea bargain.

Contact a Pennsylvania Criminal Defense Attorney for Your Defense

After you’re charged with a crime, your first responsibility is to hire an experienced criminal lawyer to represent you. No matter how much evidence a prosecutor has, the job of a Pennsylvania criminal defense attorney is to create reasonable doubt in the mind of one juror.

The Law Offices of Steven F. O’Meara has spent over 25 years fighting for the rights of defendants that are charged with felonies, misdemeanors and summary offenses. Our first step is to meet with you immediately after your arrest, so we can hear your side of the story, and begin crafting our defense strategy. Time is of the essence, which is why we urge you to contact us right after your arrest, so that we can find eyewitnesses and preserve evidence on your behalf. Please contact us today at 610-565-9200 to schedule your free consultation.