Robbery is a serious offense punishable as a felony under Pennsylvania law. Whether the robbery is a third-degree felony, a second-degree felony, or a felony in the first degree depends on the facts and circumstances of the case. At the Law Office of Steven F. O’Meara, we understand how intimidating criminal law can be. Below, we break down the various ways robbery can be charged.

In Pennsylvania, a robbery occurs when someone is committing a theft and takes additional action, such as:

Anyone of these fact patterns could elevate a charge from theft to robbery.

Understanding the Extent of Conduct Which Could Increase the Charges 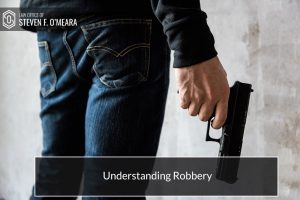 In other words, if someone demands another’s wallet and receives it, and only while leaving, utters, “Don’t call the cops or I will come back and shoot you,” this may rise to the level of a robbery charge, even though the actual taking had been completed.

Because there are many ways to commit a robbery, and because interpretation may result in lesser charges, it is essential to have a qualified criminal defense attorney on your side.

If You Have Been Charged With Robbery

If you have been charged with robbery, you already know you are facing very serious criminal consequences. At the Law Office of Steven F. O’Meara, we vigorously defend our clients, regardless of the charges. We start by evaluating the facts of the case to determine if the charges are based inadequate facts. We next examine how the evidence was obtained, searching for unconstitutional action which could result in the suppression of evidence or even the dismissal of charges. Where appropriate, we actively negotiate settlements our clients can live with.  Finally, we are always prepared to take a case to trial. With more than 25 years of experience, Steven O’Meara is ready to represent you in your case. Contact the Law Office of Steven O’Meara today at (610) 565-9200.

Need a Defense Lawyer? Your Initial Consult Is Free

In light of the Coronavirus (COVID-19), all consultations will be conducted by phone, Zoom, or FaceTime until further notice. Please contact the Law Offices of Media defense Attorney Steven F. O’Meara by phone at 610-565-9200 for more information.
Do you need to speak to an attorney?

Please fill the form below. Our counsellor will contact you shortly.