The statute in Pennsylvania reads as follows:

The use of force upon or toward another person is justifiable when the actor believes that such force is immediately necessary for protecting himself against the use of unlawful force by such other person on the present occasion.

One may only use force on another when using force is “immediately necessary” to protect themselves against the other’s use of force.  In other words, if someone hits you on Tuesday, you may not, on Wednesday, hit them back and claim “self-defense.”  Your conduct on Wednesday in 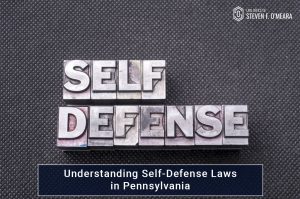 no way is necessary to protect yourself from the assault you suffered on Tuesday.  Nor does it meet the requirements of “immediately”.

If someone pushes you to the ground, then turns to walk away, attacking them from behind is also not supported by a self defense claim.  Because they were walking away, any force applied is not “immediately necessary” to protect yourself from the other’s use of force.  The other in this scenario, has, in fact, ceased using force.  Consequently, your attack is not self-defense, but rather a new assault.

Finally, if you are attacked on the way to your car, and manage to get in your car and lock yourself in, you may not then exit your car to attack your attacker.  You have a duty to retreat if you can.  Once you are safely inside your car, you may no longer argue the need to exert force on another in “self-defense.”  Your duty to retreat, however, does not extend to your own home or place of work.

Understanding Limitations on Justifying the Necessity for Use of Force

There are limitations on the use of force under the law.  For example, one may not use force to resist arrest being made by a peace officer.  This is true, even if the arrestee knows the arrest is unlawful.  Additionally, one may only use deadly force when one believes that level of force is necessary to protect themselves against the following situations:

Finally, one may only raise self-defense when they are not the aggressor in the situation.  When, either by act or word, one provokes the injury, self-defense is not available.

Charged with a Crime?

When charged with a crime, you need qualified legal counsel to represent your interests.  Understanding the legal defenses available to you, depending on the facts and circumstances of your specific case, can result in a pretrial dismissal, an offer to plead to a reduced charge, or a not guilty verdict.  Steven F. O’Meara has been practicing criminal law for over 20 years.  If you have been charged with a crime, Steven F. O’Meara will provide vigorous representation from bail arguments to contested legal issue to negotiation and trial.  Contact the office today to discuss your case.

Understanding What a Theft Arrest Lawyer Can Do for You

Why Every Criminal Defense Lawyer Wants You to Remain Silent


After a DUI arrest, you only have a few days to schedule a DMV hearing. Otherwise, your license will be suspended, so fill out the form below and we will reach out to you as soon as possible.