Getting arrested for your first DUI is not and should not be the end of the world for you. But if it becomes a conviction it will have serious consequences. If you had a minor under the age of 14 in your vehicle, or if you caused bodily injury while impaired, those consequences will be even more serious.

All states have some type of diversionary programs available for DUI offenses, usually for first-time offenders.

There are several options for people arrested for DUI in Pennsylvania that can lower the charges and penalties. 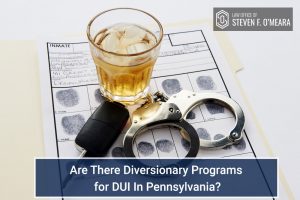 Some first-time DUI offenders in Pennsylvania may be eligible for the ARD program, which bypasses the anxiety of a trial, potential conviction and imprisonment for a DUI. The results would be a non-conviction as you are effectively on PROBATION WITHOUT A VERDICT !

If you are a Tier I offense, (blood alcohol content of less than .10 percent but higher than .079 percent,) you will not lose your driving privileges, even with a guilty plea and there was no accident involved in your DUI offense.

You are eligible for the ARD Program if you meet the following requirements:

If you are accepted into the ARD Program, your fines and penalties will include:

Violating any of the ARD Program requirements may end your participation in the program, which also means that the prosecutor can reinstate the charges against you. If you are convicted of the DUI charge, you may spend time in jail, and your license will be suspended for 12 months. (see our Ignition Interlock blog for exceptions)

After you are arrested for a DUI, there is no guarantee the prosecutor will allow you to reduce your sentence and lower penalties for you.That’s why you need the expertise of the Law Office of Steven F. O’Meara. Our three key characteristics are experience, aggressive and trusted. Call us today at (610) 565-9200 to schedule your free consultation.


After a DUI arrest, you only have a few days to schedule a DMV hearing. Otherwise, your license will be suspended, so fill out the form below and we will reach out to you as soon as possible.